Landing a Job: TK Seniors Get Help With Mock Interviews 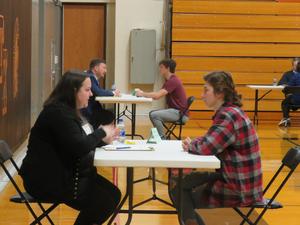 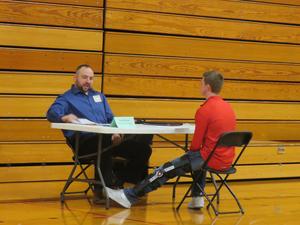 Jake Flikkema wasn't really looking for a job, but after a mock interview opportunity for Thornapple Kellogg High School seniors, he came away with a possible part-time opportunity.

"She told me if I needed a part-time job during college, I had good managerial skills and good personality and she would probably hire me," said Flikkema after interviewing with a representative from Thornapple Credit Union.

In about a month TK seniors will find themselves in unfamiliar territory - their high school careers will be over and the real world awaits them.

Some may be transitioning to colleges or universities, but many will be applying for their first full-time jobs. The process can be daunting and sometimes a bit scary. But High School English teacher Scott Aldrich gave his seniors a leg up on being successful in finding the right job.

With the help of several area businesses and agencies, professionals set up interview tables in the small gym at the high school. Students signed up for interviews, brought their resumes and cover letters and were able to practice actually interviewing for jobs.

"I wanted to do something to make this senior English class applicable and relevant to their lives. They are going to be leaving high school very soon and for some, they'll be looking for their first job whether it's part-time while they go to school or full-time," said Aldrich. "This is a way for them to get great practice."

Aldrich said 86 seniors filled time slots for interviews - some signing up for more than one interview if time permitted.

Students were reminded to be on time to the interview and have their resumes and cover letters they worked on in class ready. Prior to the mock interviews, students practiced interviewing skills in class and became familiar with some of the more popular questions asked.

Flikkema already has plans to attend school and eventually becoming a lineman for Consumers Energy. Still, he said, the experience interviewing with a stranger was helpful.

Classmate Ryan Bakker agreed. "It was really beneficial for all of us I think. We're going to graduate soon and it gives us a chance to see what's the next step. It's a huge step."

Bakker said he received good feedback during his interview with advice he will be able to use in the future and continue to grow his future.  He plans to work with Buist Electric as an electrical apprentice.

Alexis Newman admitted she was nervous when she first started the interview process. "It got a lot better as we talked more and I'm definitely more confident now," she said.

More than a dozen companies and organizations were represented at the mock interviews.