Class of 2019 Encouraged to Start Their Own Superhero Story 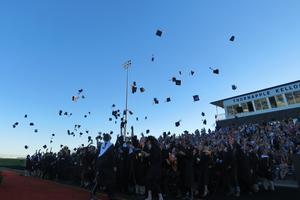 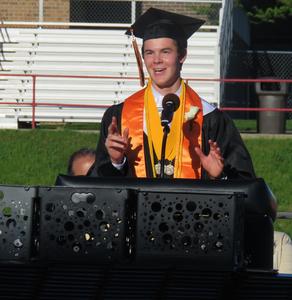 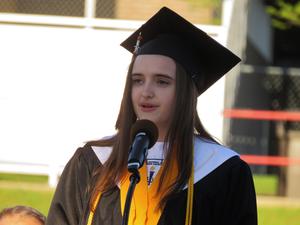 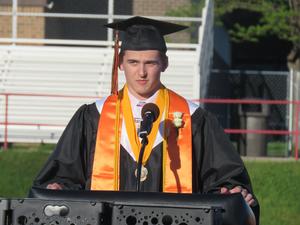 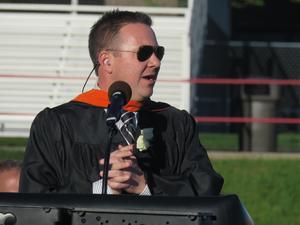 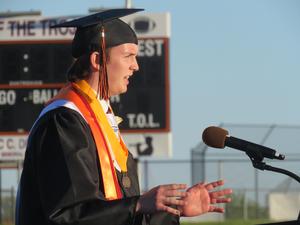 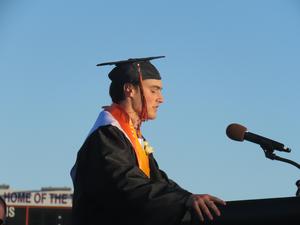 The 222 members of the TKHS Class of 2019 marched into the Bob White Stadium where many had played football or soccer or ran track. Some had marched in the band across the field. Others had been in the student cheering section at home games. There was a stiff wind blowing - but the students are all too familiar with the winds at the stadium and managed to hang onto their caps as they made their way to the graduation ceremony.

The steps they took at Thursday night's graduation will be their last steps as TK High School students, but their first steps toward their futures.

High School Principal Tony Petersen said the Class of 2019 is a "very special class of students. " Collectively,  he said, they have been awarded more than $1 million in scholarship awards and have set an incredible legacy for upcoming classes to continue.

Senior Valerie McNamara's speech to her classmates incorporated the record-breaking superhero movies which have been popular during much of their lives.

"I've recently been watching a lot of superhero movies. And something I've always been fond of was each heroes' origin story. You never know when their origin story ends and when their hero journey begins. For many of us the end of that origin story is today."

"Each of us will have a story to tell and if this is truly the end of your origin story then your hero story starts right now. What will that story be?"

No matter where each of the students heads across town or across the globe, McNamara said they will always be connected by their origins at TK.

"TK has been the quintessential small town. We'll all share the same background because of our time at Thornapple Kellogg because it anchors us. The sheep in the field across from the middle school, the field trips to the Scoop, the two trees that were soccer goals. It is what shaped our childhood and will always connect us."

She quoted Kurt Vonnegut who said, "True terror is to wake up one morning and discover that your high school class is running the country."

But McNamara said she isn't afraid because she knows her classmates are some of the most determined, passionate and independent people she knows and she's confident they will go out and make positive differences in the world.

She encouraged all to follow their dreams and live their own lives. "Never let anyone tell you, you can't do something. Be that kid from a small town on that midnight train going anywhere."

"It's not a secret that TK has a terrific staff. The faculty here truly is the best of the best," said Keiser. He said Aldrich, a teacher for 13 years, has earned the respect of all the students.

"He tries to make learning relevant for everyone and he's dedicated to all students," said Keiser.

Aldrich encouraged students to be kind to others, live their own lives, and never let the fear of the unknown stop them from taking a next step.

"The most important step you take will always be the next one. Choosing to take each step is another success and those steps will define your happiness. Today you conclude this portion of your journey following a common path with the rest of your class. And now each of you begins to forge a new path," he said.

He said along the way students should never stop learning and understand sometimes the path they take will be easy, but it's during the difficult paths where they will learn the most.

"Just because we take our own path doesn't mean we take every step alone. You are an individual but you are never alone," he said.

Aldrich suggested a survival kit for students include three items: "compassion, a sense of humor and duct tape. Each of them can fix just about anything."

He said the only step he doesn't want to see students take is stepping on each other. Instead, he said to live a life to help others.

"A life well lived is one that continually takes steps in new directions.  You will never regret steps taken to improve lives of others - to show kindness to others. In the end, it is simple kindness that matters above all else. ..Make a great world for each other. And all you need to do is take that next step."

Senior Turner Halle also told classmates to make the most of their lives. "Seize the upcoming freedom and live your own life.  Life is short. Why waste it living someone else's life?"

Carson Denman gave the closing remarks and Isaiah Guenther led the class in the tassel ceremony before the caps went flying into the air.

Senior choir members lent their voices one last time to sing the "Star Spangled Banner" together and then later joined the rest of the Honors Choir in "Bridge Over  Troubled Water." The TKHS symphonic band played the traditional "Pomp and Circumstance" at the beginning of the ceremony and ended with the TK fight song.