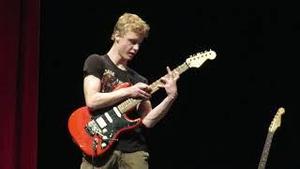 Alex Zimmerman never dreamed that entering a high school talent show could mean so much. But that one afternoon in front of his Thornapple Kellogg High School classmates playing his electric guitar has landed him on stage in front of a national audience.

Zimmerman was surprised in front of a final high school assembly by motivational speaker Phil Campbell, better known as PC Rocks on his speaking tours. PC spoke with TK students at the annual service day and stayed for the afternoon talent show. That's where he heard Zimmerman play.

A few weeks later at the final assembly of the year, Campbell appeared via a Skype session to surprise Zimmerman with some big news. Campbell arranged for Zimmerman to play the National Anthem at the opening ceremonies of the National Josten Renaissance Convention in Orlando, Fla., and offered him a scholarship to attend the youth leadership conference.  Campbell is making the scholarship possible through his "Chase Your Dreams Foundation."

The convention brings in more than 1,500 youth and educational leaders from all over the country.

"I didn't even know it was going to happen," said Zimmerman, a sophomore at TKHS. "It was a total surprise."

Zimmerman said he "kind of blanked out" after he heard he would play the National Anthem at the convention. "I don't know what was said after that honestly," he said. "I was just so excited and so surprised."

Playing in front of all his high school classmates was probably the largest audience he's had to date, he said, but it's nothing compared to the idea of playing at a national convention.

Zimmerman has only been playing guitar for about four years, but his hours of daily practice have helped him master the instrument quickly. He's a member of the high school jazz band and frequently plays at local open microphone nights and at small gatherings at local campgrounds.

The young musician said there has always been music in his home and grew to love the rock 'n roll by listening to his father's CD collection.  His favorite is Eddie Van Halen. "I heard him play and I decided I wanted to do that too," said Zimmerman.

His first encounter with playing a musical instrument was actually in sixth-grade band where he played the trombone. Shortly after, he switched to the electric guitar. His twin brother, Eric, plays saxophone and piano and they've played together at times.

Alex said his parents, Mike and Carrie,  are very supportive of him following his dreams to one day hopefully play in a band and travel the country performing.  "They enjoy hearing me play and they know I would love to play in a band some day," he said.