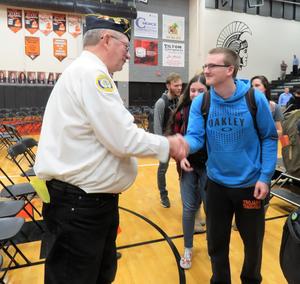 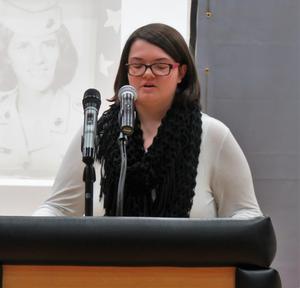 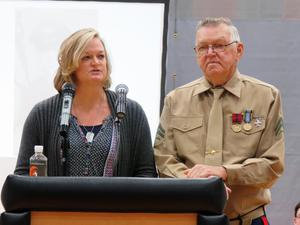 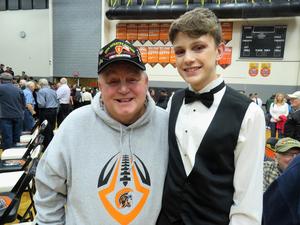 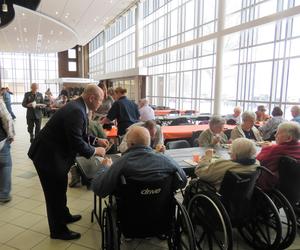 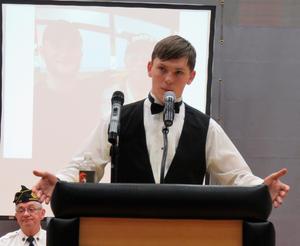 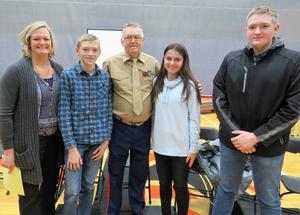 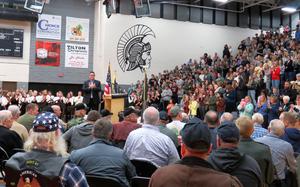 When nearly 1,000 high school students become so quiet you can hear a pin drop, you know something important has their attention. Monday morning’s annual TK and Community Veterans Day program got their attention and their respect for the veterans attending. When a moment of silence was requested for all veterans who never made it home, there wasn’t a sound until two trumpets echoed “Taps.”

This year marks the ninth annual Veterans Day program at the high school. Started in part with the urging of John Loftus, (now deceased) the program continues reminding and teaching students about the meaning of Veterans Day.

“I remember my Mom used to talk to me about my great-grandpa who served in World War II and Korea,” said TKHS student Rozalynn Reaser giving her viewpoint of what Veterans Day means.  She said her grandfather inspired her father to also serve in Afghanistan and Iraq.

High School Principal Tony Petersen introduced the honored veteran and guest speaker for this year’s event. Ivan Ploeg enlisted in the U.S. Marine Corp in November 1955 when he was 18 years old and discharged in 1958. During his service he was stationed in Japan for a year. On his trip home aboard a transport ship, he and others received orders to head to Lebanon and be part of Operation BlueBat.

“My dad was one of the first to hit the beach,” said Carla VanHaitsma speaking for her father as he stood beside her. “Their job was to protect and guard the airport.”

She said her father never regretted his service and was proud to be a United States Marine.

“I want to thank the nearly 1,000 TK High School students who inspire me every year I have observed this event. I’m proud to be part of this school and this TK community. TK Strong,” she said.

She also thanked the entire community for being so supportive of all veterans. “They don’t think of themselves as heroes. They had a job to do and they did it,” she said.

Even though only about 10 percent of service men and women today ever see combat action, she said they all play an important role. “It’s like being a piece of the puzzle. All the pieces are important,” she said.

As the honored veteran, Ploeg will be the grand marshal in the Middleville Memorial Day parade and will be able to attend the Honor Flight trip to Washington D.C.

The assembly was filled with musical tributes from the TKHS Honors Choir singing “Song for the Unsung Hero” and “This Land I Love.” The TKHS Symphonic Band also performed the National Anthem and two selections, “Gallant Marines,” and “The Flying Tigers.”

Several students were involved in the program. Killian Dudley presented the reading for the MIA POW Table, remembering all those who never made it home. Christopher VanDyke presented a reading called “Take a Moment to Thank a Veteran” by Joanna Fuchs.  VanDyke added his own thanks. “I challenge all of you to be a part of something greater. I look at all these people and I’m proud of what they have done for our country.”

Before the end of the ceremony, Charlie Pullen from the American Legion Post 140, presented honors to the school. Band director Ray Rickert and choir director Laura Oprea each receive a certificate of appreciation. High School Principal Tony Petersen and TK Schools Superintendent Rob Blitchok also accepted certificates for their support and continuation of the program.