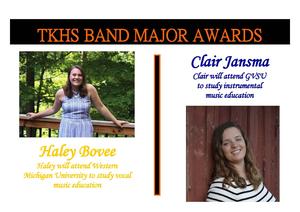 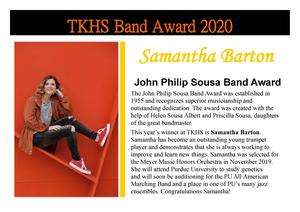 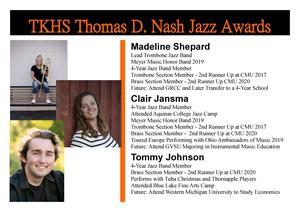 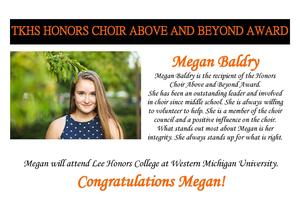 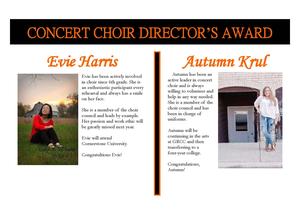 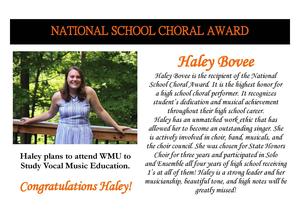 Several honors were awarded recently to outstanding students in the TKHS bands and choirs.

The John Philip Sousa Band Award was established in 1955 and recognizes superior musicianship and outstanding dedication. The award was created with the help of Helen Sousa Albert and Priscilla Sousa, daughters of the great bandmaster.

Samantha has become an outstanding trumpet player and demonstrates that she is always working to improve and learn new things. Samantha was selected for the Meyer Music Honors Orchestra in November of 2019. She will be attending Purdue University to study genetics and will be auditioning for the PU All American Marching Band and a place in one of PU’s many jazz ensembles.

The TK Jazz Band was established as a curricular ensemble nearly 40 years ago by Thomas D. Nash. When Tom retired in 2000, we named the outstanding senior jazz award in his honor. Mr. Nash was an excellent music educator and is still very active as a performer today.

Madeline Shepard is the lead trombone player in the jazz band... Maddie played in the Meyer Music Honor Band in November of 2019. Maddie has been an outstanding leader in our band and jazz programs. She is a four-year member of the jazz band. Maddie was a member of the trombone section that received the 2nd Runner Up Section Award at CMU in 2017 and a member of the brass section that won 2nd Runner Up at CMU in 2020. Maddie is going to begin her college experience at GRCC and later transfer to a four-year school.

Clair Jansma is a four-year member of the jazz band. Clair has attended the Aquinas College Jazz Camp and was selected to play in the Meyer Music Honor Band last November. Clair was a member of the trombone section that received the 2nd Runner Up Section award at CMU in 2017 and a member of the brass section that won 2nd runner up at CMU in 2020. Clair toured Europe performing with the Ohio Ambassadors of Music during the summer of 2019. Clair will be attending Grand Valley State University majoring in instrumental music education.

Tommy Johnson is a four-year member of the jazz band and a member of the brass section that won the 2nd Runner Up Section Award at CMU in 2020. Tom performs outside of school in TubaChristmas and with the Thornapple Players. Tom has attended the Blue Lake Fine Arts camp to further his abilities as a trumpet player. Tom will be studying Economics at Western Michigan University in the fall.

Honors Choir Above and Beyond Award - Megan  Baldry
She has been an outstanding leader and involved in choir since middle school. She is always willing to volunteer to help. She is a member of the choir council and a positive influence on the choir. What stands out most about Megan is her integrity. She always stands up for what is right.

Evie has been actively involved in choir since 6th grade. She is an enthusiastic participant every rehearsal and always has a smile on her face. She is a member of the choir council and leads by example. Her passion and work ethic will be greatly missed next year. Evie will attend Cornerstone University.

Autumn has been an active leader in concert choir and is always willing to volunteer and help in any way needed. She is a member of the choir council and has been in charge of uniforms. Autumn will be continuing in the arts at GRCC and then transferring to a four-year college.

The National School Choral Award, is the highest honor for a high school choral performer. It recognizes student’s dedication and musical achievement throughout their high school career.

Haley has an unmatched work ethic that has allowed her to become an outstanding singer. She is actively involved in music activities at TK including choir, band, musicals, and the choir council. She was chosen for State Honors Choir for three years of high school, and participated in Solo and Ensemble all four years of high school and received 1’s at all of them. Haley is a strong leader and her musicianship, beautiful tone, and high notes will be greatly missed! Haley plans to attend Western Michigan University to study vocal music education.