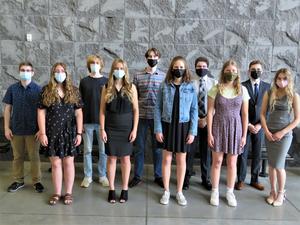 Thornapple Kellogg High School is preparing for the graduation of the 217 members of the Class of 2021 and recently honored the top 10 academic students in the class.

Graduation will be at 7 p.m. May 27 in the stadium. Each graduate is allowed four tickets for guests to attend. The event will also be livestreamed. More information about the livestream will be made available at a later date.

The graduation will feature high school teacher Danny Thompson as the keynote speaker and Megan Chinavare to give the senior class address. Other students having roles in the ceremony will include Caedon Zube giving the opening remarks, Carly Snyder introducing the keynote speaker, Emma Fabiano offering closing remarks, and Benjamin Van Hoven leading the tassel ceremony.

The top academic students in the Class of 2021 were announced recently. They are listed here in alphabetical order.

Haven is the daughter of Dan and Shawna Beyer. Her school activities have included basketball where she served as captain for three years, cross country, National Honor Society, youth basketball coach, Special Olympics referee, and TATU.

Her hobbies outside of school include playing basketball, music (especially guitar and piano) and Spanish.

She plans to attend Judson University and will join the music business and entrepreneurship degree program. She will also be part of the choir, guitar ensemble and women’s basketball team.

His extracurricular activities have included varsity tennis, Business Professionals o f America, Y-Mentors, YAC, and being a representative for Leadership Barry County Board.

His hobbies include tennis, being with friends, playing video games and investing.

He will attend the University of Michigan’s Ross School of Business with plans for a future in finance.

Emma is the daughter of Andrew and Michelle Fabiano. She has numerous high school activities including National Honor Society, Ski Club, Engineering Club, Students for Life, equestrian team where she’s been a top 10 rider three years, volleyball, Science Olympiad, and BPA where she’s been a state qualifier two years.  She also serves as the senior class vice president.

Outside of high school Emma is busy with 4-H, being a volunteer at the Barry County Animal Shelter, and a volunteer at a therapeutic riding barn. Her hobbies include riding and showing her horses and gardening.

She lists her greatest accomplishments in high school as being the vice president of her class and being the class salutatorian.

She plans to attend GRCC this summer and transfer to MSU in the fall where she will major in finance with a minor in computer science.

Sam is the son of Robert and Sue Morton.

He will attend St. Olaf in Northfield, Minnesota to pursue degrees in jazz, music composition and mathematics/physics.

He lists his greatest achievements as writing a big band performance piece and having it performed by the TKHS Jazz Band, being named first chair trumpet, and scoring a 1,440 on his SAT.

Ellie is the daughter of Russell and Katherine Rogers.  Her high school activities and awards have included TKDKH Dive where she was named most valuable diver in her freshman year, softball, four years of high school musicals, Young Life, National Honor Society secretary, and Honors Choir.

She has been a member of the Youth Advisory Council, Circle of Giving, and been involved in National Honor Society blood drives, toy drives and food drives.

She enjoys hanging out on Gun Lake, making Target runs, thrifting, and driving while listening to music. Her interests include Minecraft, Panda Express orange chicken and chai lattes.

Her greatest accomplishments at TK include being named a top senior student, and learning to balance school and extracurricular activities.

She plans to study in the math or physics fields at the University of Michigan.

Carly is the daughter of Durk and Debra Snyder. She lists numerous school activities and awards including many honors received from bowling. She has been a bowling team member for four years and an all-conference bowler all four years. She was also named All-State Division 2 bowler in 2019 and was named most valuable bowler in the TKHS 2018-19 season.

In addition to bowling, she has played softball and is one of two captains of the 2021 varsity team, played freshman volleyball, participated in musicals and plays, National Honor Society, and TKHS Honors Choir.

Outside of school she is a student helper in the preschool room at Brightside Church, hostess at Brann’s Steakhouse and Grille in Caledonia, has donated blood, and is part of a youth bowling league at Spectrum Lanes. Her hobbies include bowling, softball, recreational swimming, spending time in the U.P. with family, taking walks in the woods with her dog, and singing/acting.

She lists her greatest accomplishments at TK as earning the highest honor roll for all semesters, being named Rotary Student of the Month, and being awarded a certificate of merit by the Michigan Technological University Chapter of the Society of Women Engineers for the excellence and potential demonstrated in science and engineering.

Carly plans to attend Davenport University with the intention of becoming part of the nursing program while also being a member of the Davenport bowling team. She hopes to become a pediatric nurse.

Ben is the son of Gregory and Marianne Van Hoven.  His high school activities include the National Honor Society.

He lists his hobbies and interests as video games, music, and drives with his friends. He lists his greatest accomplishment at high school as being in the top 10 academically.

He will attend Northern Michigan University to major in biochemistry.

Michael is the son of Greg and Cindy Willshire. He has earned highest honors all four years of high school.

Willshire has earned many bowling honors during his four-year high school career including being named to the All-Conference team for the 2019-2020 and 2020-2021 seasons. He also was named to the honorable mention all-conference team for the 2018-19 season. In 2019-20 he was the high school season region 9 champion.  In the 2020-21season, Willshire rolled a perfect 300 game in competition and finished with a 211 average for the season.

His hobbies include bowling and playing video games.

Michael will attend Davenport University to study cyber defense. He will also be a member of the Davenport men’s bowling team.

Outside of school she has worked with the Thornapple Area Enrichment Foundation, the Youth Advisory Council, and is a member of Far Out Volleyball Club and KP athletics in pole vaulting.

Her hobbies include running, working out and lifting weights, art especially drawing and ceramics, hiking, snowboarding, skiing, and hunting.

She lists her greatest accomplishments at TKHS as being in the top 10 of her class, earning all-conference honors in track, academic all-state honors, going to state competition in pole vault, and earning highest honor roll all four years.

Caedon is the son of Nate and Brandy Zube. His many high school activities have included being president of the National Honor Society, Science Olympiad, BPA where he qualified for national competition, Engineering Club, Close Up, TK Packers, being an AP Scholar with Honor, earning highest honor roll all four years, and earning the College Board National Rural and Small Town Recognition Award.

Outside of school Caedon has served as the grant committee chair for the Youth Advisory Council, worked at Big O’ Smokehouse and is currently the student sanitation leader, and practices Historical European Martial Arts through the Swordsmanship Museum and Academy.

His hobbies include collecting knives and militaria, investing in trading cards, hiking, and watching esports. He lists his greatest accomplishment at TKHS as being in the top 10 academic students in his class and qualifying for nationals in his first year of competition with BPA.