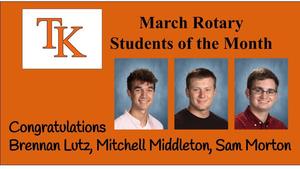 Three TKHS seniors were honored as the March Rotary Students of the Month. They are Brennan Lutz, Mitchell Middleton and Sam Morton.

Brennan is the son of Ted and Tara Lutz.  He has been a member of the cross country and track and field teams where he has earned multiple medals.  He has received the student of the month honors, earned varsity letters in track and cross country, and achieved a 4.0-plus grade point average.

He is a member of National Honor Society and has participated in many community service projects. His hobbies include weightlifting, running, wood working, drafting and hiking.

Brennan will attend Calvin University to pursue a degree in biomedical engineering.

Mitchell is the son of Sarah and bob Middleton. His accomplishments in high school include being a National Honor Society member and honor roll. He also has several football honors including being named to the first team all-state team, first team all-area kickers and punters, first team all region specialist, Grand Rapids Dream Team, Grand Rapids all-region player, and for setting a new 52-yard field goal school record.

Sam is the son of Robert and Sue Morton. He is a member of the National Honor Society and was recently named as a top 10 student in the TKHS Class of 2021. He has been part of the TKHS band receiving awards at CMU’s jazz festival in 2020 and 2021.

Sam is member of the TKHS tennis team, marching and jazz bands, ski club and participated in the 2021 musical. He has received honors in tennis including the sportsmanship, doubles chemistry and coaches’ awards. He also is active at Gun Lake Community Church where he is a drummer, video switch operator and youth group leader.

He will be moving to Minnesota to attend St. Olaf in Northfield, Minnesota to pursue degrees in jazz, music composition and mathematics/physics.