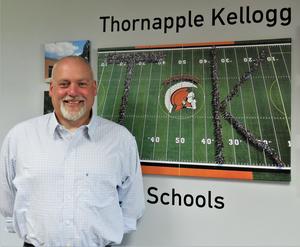 New TKHS Assistant Principal Tony Bush said he was attracted to TK because of the historical excellence of the district and the small-school feeling. “I’m ready to help make a difference in the lives of students and help mentor them to be successful.”

Bush describes himself as a people person with a big heart who loves kids and can connect with them. It’s a career he almost never considered.

“When I was in high school I wanted to be a Marine,” he said. Eventually he was persuaded to pursue his talents as a tuba player and earned a full musical scholarship to Michigan State University.

In college things changed again. “When I was in college, my band director told me I had too much personality and encouraged me to become a teacher,” said Bush.

He had already started applications to Julliard School of Music and other prestigious musical schools around the world, but eventually also gave teaching a try. A semester of student teaching fifth graders changed his life. “I absolutely fell in love with it. I called off all my applications and submissions for music to become a teacher,” he said.

Coming from a farming background and financially less fortunate than many of his classmates in school, Bush said he knows what it’s like to feel on the outside, to be bullied and to feel alone.  “I can connect with those kids. I have a lot of compassion and empathy for them. I lived through some of it myself.”

He said treating students with respect and listening to what they have to say is important. “I don’t judge any kid. I don’t care what clothes they wear or if they are into video games or sports or whatever. I just listen to them.”

His 20-year career in education started as a music director at Grand Rapids Christian High School.  He moved to Allendale School as a music director for 12 years and then to Coopersville Area Public Schools in 2017 where last year he was appointed to create the CAPS Virtual program.

He’s also worked as an adjunct professor of tuba at Cornerstone University and Calvin College and serves as a clinician for the Michigan Music Conference in Grand Rapids and he still enjoys playing with many area symphonies.

His priority now is settling in at TK. “I’ve heard so many great things about this district. I knew Kevin Remenap and I want to continue where he left off and help the school heal from the loss.”