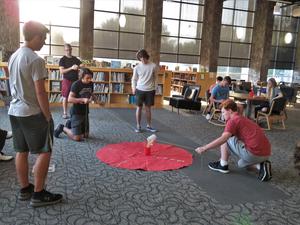 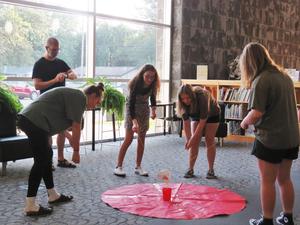 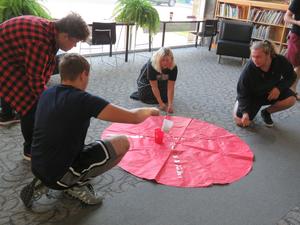 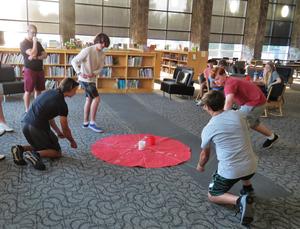 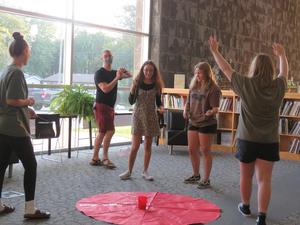 TK students to the rescue! Well – at least in a high school physics class simulated activity.

The problem: A toxic spill container is leaking dangerous chemicals. Students must transfer the items from the container into a safe container for removal. The area around the leak is contaminated and students cannot step or lean into the contamination zone. Their hands and feet must stay out of the toxic cylinder zone. Their tools for the job – some string, rubber bands and a safe cup for transfer.  And – they only have two minutes once they begin the process to finish.

A red circle mat is spread out in the Thornapple Kellogg High School Library to designate the toxic zone. One cup is positioned in the middle of the paper filled with popcorn kernels to simulate the leaking container. Working in groups, students must transfer their “safe” container into the toxic zone and set it down. They then have to pick up the contaminated cup and dump the popcorn kernels into the safe cup.

All day, physics students from classes taught by Alex Robinson and Charley Vickers tried to tackle the challenge. They kneeled close to the mat carefully adjusting their movements to control the cups. Some teams struggled as the kernels spilled all over the red mat, while others let only a few kernels spill out. The library erupted in cheers when the team of Lane Cross, Corey Holt, Ethan Kriekaard and Noah Rosenberg, successfully completed the mission transferring all the kernels.

“It didn’t work as well yesterday when we were practicing,” said Cross. “We practiced a lot and we had to keep changing things and trying again.”

Holt said after practice they added a fifth string to the cup for added stability during the pour. “We knew we needed to add stability and control,” he said.

Robinson said collaborating, working together and continuing to modify their strategies was a big part of the lesson that introduced the basic engineering design process.

Teams employed various techniques - some very successful and others not so much. Cross said it took a lot of coordination between the teammates as they pulled and adjusted the tension on their strings, realizing that every movement had an effect on the cup.

“It’s a fun project,” said Robinson. “It challenges them to keep trying and to keep working together.”