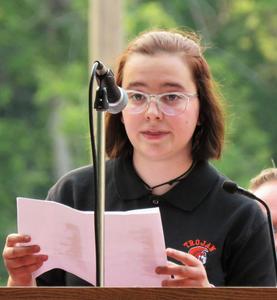 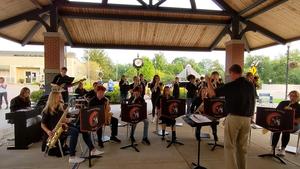 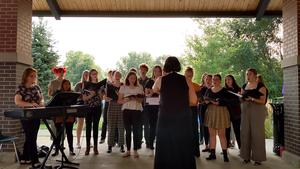 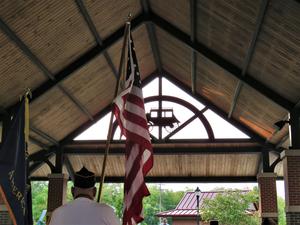 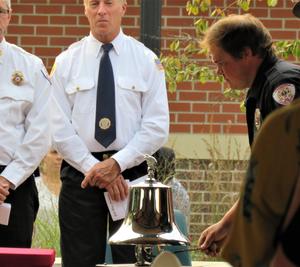 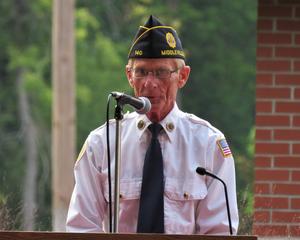 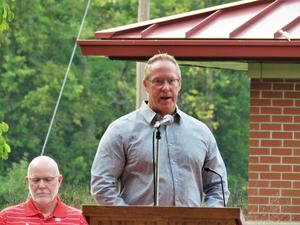 Although none of the high school students participating in Saturday’s 9-11 commemorative event were alive on that historic day, each played an important role in remembering the events and honoring all who died.

“Each of you sitting here today and those who unfortunately aren’t, are all a piece of a grand puzzle of unity – a grand puzzle of purpose. Today we remember all of them -  from floor 100 to floor 1. From Vesey Street to West Side Highway to Liberty Street and Church Street - every single person, each tattered shoe, told a story passed on today. Each bag held purpose - from the briefcases to the lunch tins, the word ‘tragedy’ doesn’t encompass the true feeling,” said Saba in her 9-11 poem.

“Each official - from coffee boy to department head - in the Pentagon had a purpose. Each passenger on Flight 93 had a purpose – a purpose to live and a purpose to love....On that day each voice combined and synchronized and silenced our country as a whole. That silence determined the ever lasting effects of these attacks. Today is the day we hear those voices.  We hear them – the ‘I love you’s,’ and ‘I’m sorrys,’ and ‘let’s roll.”

She said the community assembly represents the nation’s assembly. “And today, not only is our grief universal, our love is and our strength is. So today, mourn for all of those that lost their lives, but also live with their presence in your hearts, their infinite possibilities in your soul and speak loud so they can be heard through you.”

High school members of the Jazz Band played “God Bless America” to start the ceremony and the students in the Honors Choir performed a beautiful song, “Because of the Brave” during the tribute.

Capt. Rich Jenkins, U.S. Army, of American Legion Post 140 asked the high school students and their generation to carry on this tradition of remembrance for years to come.  “We are a great nation – the greatest free nation on this planet,” he said. “We might have been knocked down, but we have not and will not ever be defeated.”

Jenkins expressed gratitude for the many firefighters and first responders who lost their lives that day answering their call to help and to all the servicemen and women who lost their lives protecting our country’s freedom after the attacks. He remembered his longtime friend and former Middleville Village Council President Charlie Pullen who died in 2020. “Let’s remember Charlie and what he would always say – that no soldier should ever live alone and more importantly no soldier should ever die alone. Let’s honor him by honoring those who served and let us never forget Sept. 11, 2001.”

Thornapple Township Fire Chief Randy Eaton asked everyone to think about community and service to the community now and in the future. “That’s what it’s all about – all of us working together and pulling together.”

Keynote speaker and host Judge Mike Schipper also remembered the sense of unity and patriotism – on the days and weeks after 9-11. “September 11, 2001, someone actually attacked our country on our soil. And it was scary,” he said. “That day was important, but what was really important was Sept. 12 and the days and weeks after. The response to 9-11, as a country, was magical.”

He said there were two important things he learned from 9-11. One is how so many people selflessly served others without regard to their own safety and, second, how it pulled people together and did not divide the nation.

“The last 18 months today have not brought out the best of us.  We’ve allowed a virus to divide us in a very un-American way. The greatest strength of our country has always been our diversity and our respect for our differences. A virus has somehow divided many of us. This can’t happen. Stop hating because of differences and start loving and serving each other.”

The ceremonial striking of the Four Fives by TTES members honored the firefighters and first responders who died. A wreath was laid in honor at the pavilion and a second wreath at the veteran’s memorial. TTES also rang the Ernie Ball Bell with one toll for each war the United States has fought. And even though they knew the blasts were coming, guests flinched at the sharp crack of the firing of guns by American Legion members.  A somber quiet fell over as TKHS students echoed “Taps'' across the river.

Before the closing singing of “God Bless America,” Schipper asked everyone for one last favor. “Please don’t let any of the veterans here tonight leave without their hand being sore from all the handshakes and thanks they should receive. God Bless America.”