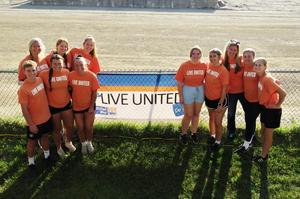 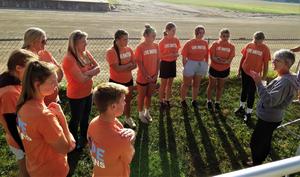 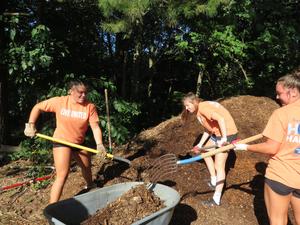 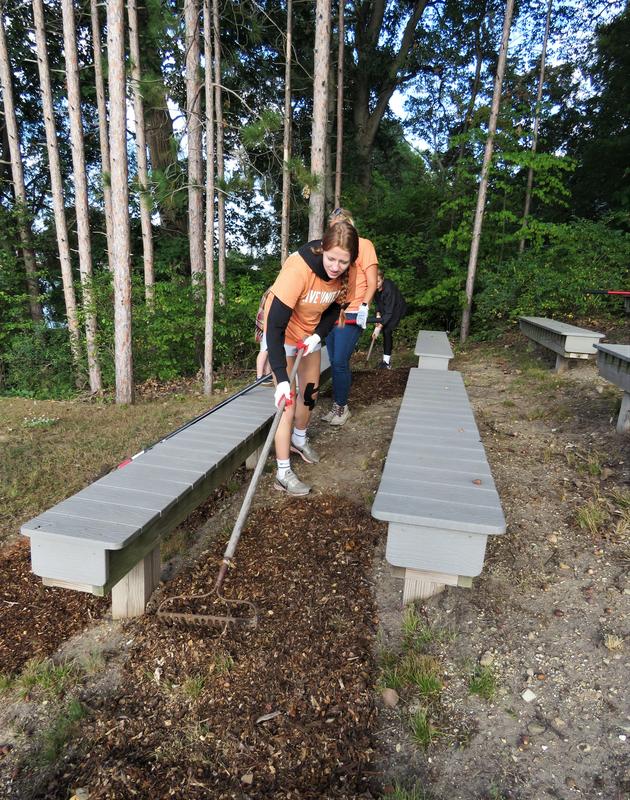 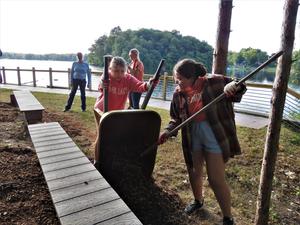 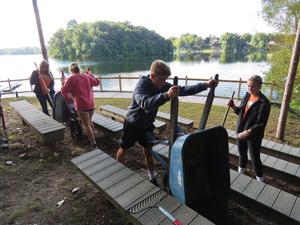 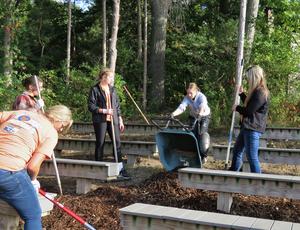 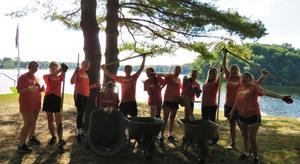 More than 400 volunteers tackled projects throughout Barry County and kicked off the United Way’s annual campaign efforts. This year, TK students worked at YMCA Camp Algonquin looking out over the beautiful lake as they spread a mountain of mulch in different areas of the camp.

“It feels good to give back to the community,” said TK Student Council President Anna Benedict. “It’s really something bigger than just our school. It helps the entire community.”

Junior Thea Zellmer agreed. “It’s giving back to the community and hopefully we are inspiring others too.”

TK senior Cassidy Dole took a quick break from shoveling mulch into waiting wheelbarrows. “It’s important to give back to the community. We look to our community for a lot of support in the schools and this is our time to show them how much we care and can support them too. It’s a very positive experience.”

Paris (Hale) Viviano said she likes the positive message it sends. “Especially in these hard times it’s important to give back and help others,” she said. She and classmate Mitchell Corner serve as vice presidents of the student council.

Junior Mia Dickman carted wheelbarrows filled with mulch down a steep slope to a seating area overlooking the lake. It was hard work, but she said she was glad she was able to help. “It unites our community for a great cause. We just need some good in the world,” she said.

Student Council advisors Liz Ritsema and Caitlin Chamberlin weren’t shy about rolling up their sleeves and pitching in to help out alongside the students. Ritsema said she’s very happy the students were able to participate this year. “It’s so awesome to be able to do this. It’s important to them to help give back to the community and we love doing it. We try every year to do a few events to help out.”

The morning started off with a kickoff event at the Barry County Expo Center where volunteers gathered on the bleachers at the grandstand.  Director Lani Forbes told the volunteers how the United Way programs and efforts have helped many throughout the past year. She said United Way has already raised 20 percent of this year’s fundraising goal of $675,000.

She thanked Wal-Mart for donating an over shipment of seeds this spring that now have literally been given away throughout the county. “These seeds and gardens have been sprouting up everywhere and we are literally planting seeds of hope,” she said. “Hope is growing everywhere.”

United Way invested more than $4.5 million in Barry County last year which is a $1 million increase from the previous year supporting a number of projects and programs.