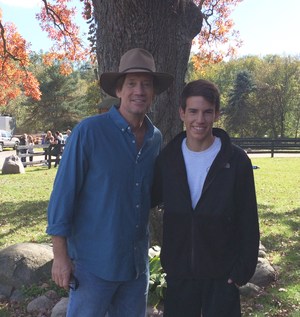 In the midst of studying for finals, Thornapple Kellogg High School junior Derek Brandon is looking forward to a red carpet premiere release of the film "Rodeo Girl," in which he has a leading role.
He admits playing the part of a cowboy in this movie was a bit more out of his comfort zone than his recent "Mickey Matson" action movies. Still, he said he's grateful for the opportunity and the chance to learn and grown with different genres of film.

Filmed largely at Roanoke Ranch for Kids in Lowell, Brandon plays the part of "Sage" who helps a teen girl learn to compete in rodeos. The leading girl is Sophie Bolen from Forest Hills. She plays the daughter of a horse ranch owner played by star Kevin Sorbo from "God's Not Dead" and "Hercules."

The film is being released early on DVD in select Walk-Mart stores and is set for a red carpet premier showing at Celebration Cinema North Jan. 30 where the stars will meet and greet fans after the show. The premier starts at 4:30 p.m. with the showing at 5 p.m. There will be time for autographs and photos with the stars after the premier.

Tickets for the premiere can be purchased at www.celebrationcinema.com. Tickets are $25. Proceeds from the premiere will be donated to the Roanoke Ranch. The ranch helps at-risk youth gain confidence and self-esteem through working with horses.

"It was hard because I was supposed to teach a girl in the movie how to ride in the rodeo and I don't know anything about horses," he said. "But there were a lot of people I learned from during the shooting. I had to learn first, and then teach her in the movie."

The film is directed by Joel Paul Reisig, a Grand Rapids native and a Hope College graduate. The film tells the story of a teenage girl shipped off to America to live for a summer with her father in Michigan. While there, she and her horse, Lucky, end up competing for a spot at the National Youth Rodeo, with a little help from Brandon's character.

"It was a lot of fun doing this movie. It was something totally different for me. It was a little harder to get into the character because it was not like me at all," Brandon said.

"I wore a lot of flannel shirts and boots  - not generally what I wear every day," said Brandon sporting a workout jacket, t-shirt, and sweatpants after school this week.

Brandon said he's pleased with the movie and can't wait to see how it's received by the public. He's also excited to wrap up production on two other film projects that right now have no release date set. One is  a romantic comedy called "Crowning Jules" with Kevin Farley and Hollywood newcomers Jacqueline and Elizabeth Labadie.

Brandon was also cast as a main character alongside Patrick Schwarzenegger and Jacob Lofland of "Maze Runner- Scorch Trials" in a post-apocalyptic thriller titled "North."

And in February, Brandon will head to California for five weeks of pilot testing. While there, he hopes to read for several parts in movies and possibly a television series.

"I've gone out for pilot month a few years now and I'm getting better and better every time. I'm more confident and getting closer and closer to landing something," he said.

Last year he was competing for the role of the new Spiderman. "That would have been great," he said flashing his charismatic smile.

Brandon said he would most like to work in action films, but said he's open to just about anything,

To date, his biggest releases have been two Mickey Matson adventure films directed by Harold Cronk. Brandon plays the leading role there as the young and adventurous Mickey Matson. He starred with Christopher Lloyd of "Back to the Future" fame in those Matson films. There is talk of a third Matson film, but no filming schedule set yet.

"He (Lloyd) was really great to work with. He sat down and talked to me a lot about what I want and how to go about getting it. He took time out to really help me and he told me he believed I had what it takes. Coming from someone like him,  that meant a lot," said Brandon.

Brandon said he would most like to meet and work with Tom Cruise in an action film some day. "I think that would be great. That's the kind of movie I would like to do most."

Until that day comes, Brandon says he's enjoying high school and plans to graduate from TK although he's already passed the California High School Proficiency Exam which enables him to work as "Legal 18," although he still attends high school.

While at TK, Brandon played soccer this fall and depending on his film schedule may run track in the spring. He gave up playing basketball this winter because of the time he will spend in California.

"I just try to be a normal high school kid. This is where I grew up. This is where my friends and family are and this is where I stay grounded," he said. "The school and all my teachers have been really great in helping me with my schedule and classes and everything. I can't thank them enough."